What is a normal menstrual cycle？

The normal length of the menstrual cycle is typically between 24 days and 38 days. A normal menstrual period generally lasts up to 8 days.

When is bleeding abnormal？

•       Bleeding or spotting between periods

•       Heavy bleeding during your period

At what ages is abnormal bleeding more common？

Abnormal bleeding can occur at any age. However, at certain times in a woman’s life it is common for periods to be somewhat irregular. Periods may not occur regularly when a girl first starts having them (around age 9-14 years). During perimenopause (beginning in the mid-40s), the number of days between periods may change. It also is normal to skip periods or for bleeding to get lighter or heavier during perimenopause.

How is abnormal bleeding evaluated?

You will have a physical exam. You also may have blood tests. These tests check your blood count and hormone levels and rule out some diseases of the blood. You also may have a pregnancy test and tests for sexually transmitted infections (STIs).

What other tests may be needed to evaluate abnormal bleeding？ 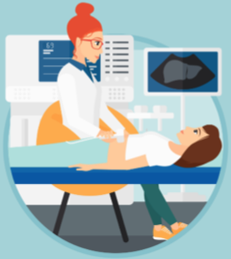 What medications are used to help control abnormal bleeding？

•       If you have an infection, you may be given an antibiotic

What types of surgery are used to help control abnormal bleeding？

•       Endometrial ablation destroys the lining of the uterus. Pregnancy is not likely after ablation, but it can happen. If it does, the risk of serious complications, including life-threatening bleeding, is greatly increased. If you have this procedure, you will need to use birth control until you reach menopause

•       Uterine artery embolization is a procedure used to treat fibroids. This procedure blocks the blood vessels to the uterus, which in turn stops the blood flow that fibroids need to grow

•       Another treatment, myomectomy, removes the fibroids but not the uterus

•       Hysterectomy, the surgical removal of the uterus, is used to treat some conditions or when other treatments have failed